Did you know? Decorating eggs for Easter and other springtime holidays/rituals has been a tradition for over 60,000 years! 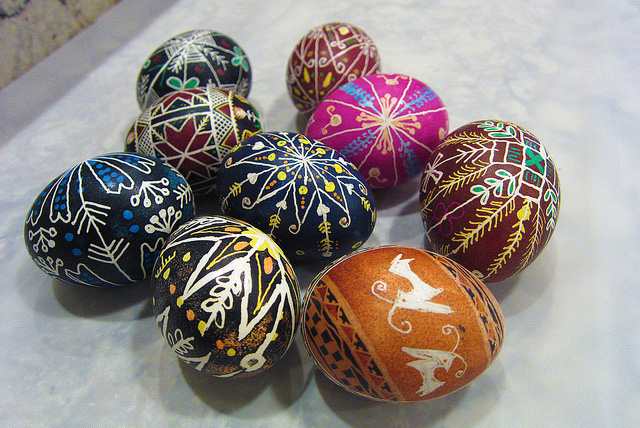 Decorating eggs for Easter and other springtime holidays/rituals has been a tradition for over 60,000 years! Decorated, engraved ostrich eggs were found in Africa dating to approximately 60,000 years ago.

Before the royal dynasties in Egypt and the early cultures of Mesopotamia , eggs were associated with death and rebirth, as well as with kingship, using decorated ostrich eggs. Representations of ostrich eggs, in gold and silver, were commonly placed in graves of the ancient Sumerians and Egyptians as early as 5,000 years ago. These cultural relationships influenced early Christian cultures in those areas, thus leading to eggs being decorated for the Easter holiday.

The Christian custom of Easter eggs, specifically, started among the early Christians who stained eggs with red coloring in memory of the blood of Christ. The Christian Church officially adopted the custom, regarding the eggs as a symbol of the resurrection of Jesus around the year 1610. Over the last 400 years, the traditional has evolved into what we know today in which eggs are decorated in a vast amount of colors by children. Games such as egg tosses, egg rolling, etc. have come from the decorated tradition, offering additional ways of celebrating the Easter holiday.